Life Skills I Learned from Cricket! 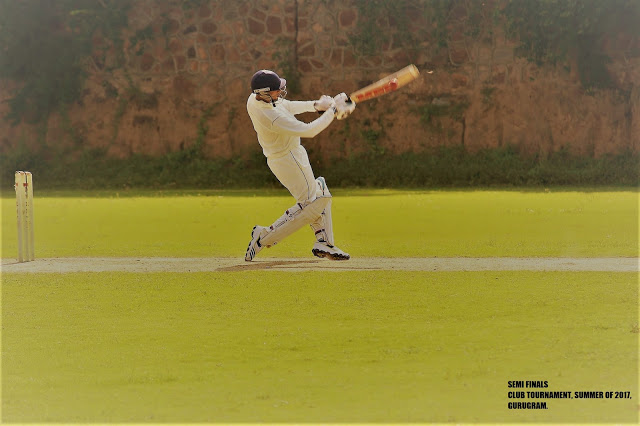 There are a lot of studies that suggest that playing a sport is crucial for an individual as the same nurtures a strong character and polishes the overall personality. I agree with this study not just because of it being "technically" logical, but also because of my experience as a sportsman for about two decades.

I have enjoyed playing various sports, however my personal favorite has always been cricket. Not just because I was born with a knack of being good at it, but also because of the way this sport has the potential to groom ones personality, and teach invaluable life skills.

The world around us constantly keeps telling us that "Attitude is Everything", however no one really teaches us how to imbibe the same. Cricket however gives a platform the put this attitude into practice‍

Focus on the present:

‍Cricket is a sport that requires everyone on that field to showcase a cent percent focus at all times. Right from the batsman, the non striker, the bowler, keeper,and all the fielders, even the umpire can not afford to lose focus at any given point. No wonder why test cricket (played for 15 sessions spread over five long days) is considered to be the toughest and purest form of the game, and hence named as 'test' owing to the amount of mental strength and focus it requires to excel at it.

Optimism and a cent percent commitment:

‍Cricket is famously referred to "The sport of uncertainties", as the game can turn around at any point in time. This trains the players to always stay positive and never lose hope, or become complacent. It sows and nourishes the seed of optimism as the players don't really have a choice to get carried away with their emotions or sulk upon what did not go their way. All they can do is to pull themselves up, dust themselves off and give their hundred percent effort to win. Imagine if our so called "underdog team" had given up hope after setting a target of merely 184 for the mighty West Indies, during the 1983 World Cup finals.

‍The true character of a person is not only judged by how he/she handles success, but also how he/she tackles failure. Statistics show that no matter how relatively good or bad the opponent is, you can not win all the games. Cricket is a gentlemen's game and the core morals of the game imbibe being graceful and appreciating all players even if the game is lost. ICC World Cup 2007, was a disaster for us, we finished beneath Bangladesh, but the same year we ended up winning the first ever ICC T20 World Cup, and the subsequent ICC World Cup in 2011.

If you will connect with any corporate manager, and ask him/her, "what are the top skills they look for in their employees?", one of them will definitely land up to be "team work". In my opinion there is no better sporting platform other than cricket that trains upon all key traits a team player must have.

Cricket is a highly competitive sport and every player wants to win, but also aspires to generate good personal stats (runs or wickets). It might seem very obvious that its a win win situation, and better a player stats, better it is for the team. However, this might not always be the case. At times there can be a clash in both (for instance, if the team is in desperate need of runs the batsman might be required to play a few risky shots, thereby putting his wicket at stake),and those are the moments that teacher a player to always align personal goals with team vision, even in case of a clash.There is no greater player than Mr. dependable, Rahul Dravid, who on numerous occasions has showcased this. Be it keeping for the team in ICC World Cup 2003, so that the team could play another batsman, or batting completely against his natural game and scoring a quick 50 of merely 22 balls,against New Zealand in the 'TVS Cup, 2003', Rahul has truly been a team player and always aligned his personal goals with the team.

‍A good chemistry among team members, be it on the field or off the field, is essential for a successful campaign. Trust and empathy are two pillars to develop a good bond with one another. The most precious thing on field for a batsman is his wicket. Imagine two batsman on the crease lacking trust in one another. How will they ever run well between the wickets? Or imagine a bowler not having trust in his fielders, that they will hold on to the catches, or save the boundaries. In a sport like cricket, the amount of dependency the entire team has on one another is unimaginable. If one player is not confident, it impacts the overall confidence of the team. Hence, empathy is also an essential trait that players learn by talking to each other and helping each other out during tough times.

‍Another very crucial factor for being a good team player is having compassion with one another. Every player has some strengths and some weaknesses, and its crucial that the team remains highly aware towards this and leverages any given challenge appropriately.

Leadership is a skill that every entrepreneur or manager aspires to master, however it is not something that you can learn sitting in a management lecture. Leadership is an attitude which is developed over time by stepping up to situations that demand a good leader. If you ask a person who has ever captained a team of cricket, believe me he will second me on how it is a brilliant platform to nurture a leader. Here is how:

The first and foremost requirement of being a leader is to have the guts to take charge of things. Taking charge doesn't mean dictating terms, it means taking responsibility of any result and feeling accountable for any failures. A true leader is the one who puts his team ahead in success, and steps up when there is a failure. The Indian cricket team has been lead by many great leaders like Kapil Dev, Saurav Ganguly, Rahul Dravid and Mahendra Singh Dhoni, who have displayed this trait on numerous occasions.

‍Many leaders consider themselves as good motivators, however in my opinion the same is extrinsic and short-lived. It is easy to motivate someone,what's hard is to inspire. Inspiration comes from within, to inspire a team is not easy, only a leader who is so committed and sets the right example can inspire a team. Just by looking at the energy levels a team gets inspired. There is no better example than Virat Kohli for this. Even if you are sitting in front of your television, watching him in action, you can not help getting inspired, imagine what impact he would be creating on the team members.

Effective communication is the guiding principle to keep a team together. I have seen so many teams shatter only due to miscommunication. It is the role of a leader to master his communication. Communication starts with making team members comfortable, breaking the ice if required for a new player, making them feel at home. It involves not just speaking the right words or explaining roles & responsibilities, but also listening, taking team inputs, and understanding what is in the best interest of the entire team. A team captain, a leader, is the thread that binds the entire team through his communication. I personally relished the chats M.S.D. kept on having with his team from behind the stumps.

‍They say "when life throws a lemon at you, its up to you to throw it away or be creative, adaptive and make a lemonade out of it". Every captain walks on the field with a strategy, a game plan. But how often do things go as planned? Do you think we would have those close nail biting games like the '2002 Natwest series final' between India and England? Saurav would have wanted Sachin and Rahul to win that game for us, that might have been the strategy, the plan. "The sport of uncertainties", yes this sport teaches you how to analyse and make excellent strategies, but what makes the strategies effective is the skill of being creative and adapting with the events. M.S. Dhoni, is considered to be one of the best readers of the game. He has been known for winning games for India on the basis of  his sheer ability to be creative and adaptive. Be it choosing Joginder Shama over the experienced Harbhajan Singh, to bowl the last over of the 'ICC T20 World Cup, 2007', or asking the off spinner R. Ashwin to bowl the final over at the 'ICC Champions Trophy, 2013', or be it his cute tips from behind the stumps, M.S. has always been at the top of the game.

"Cricket has played a major role in my life, teaching me all necessary life skills, grooming my personality and always keeping me on the front foot". - RJ.

Subscribe to our newsletter
Thank you! Your submission has been received!
Oops! Something went wrong while submitting the form.
Related articles

Life Skills I Learned from Cricket!